Interested in Ruby on Rails? If so, you'll be happy to learn we've loaded the full RoR mailing list archive. It holds about 200,000 emails and includes both the original Mailman lists from 2004-2006 and the GoogleGroups lists from 2006 onward.

Don't forget, we have the regular Ruby lists too. 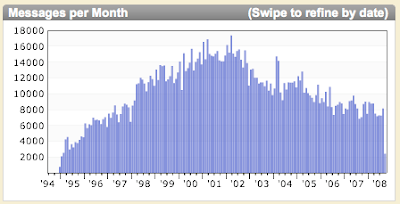 Last week we finished adding the NetBeans and OpenOffice.org mailing lists to the MarkMail archive. Both communities host more than a million messages each. Here's the NetBeans activity graph (with automated bugs and check-in messages removed): 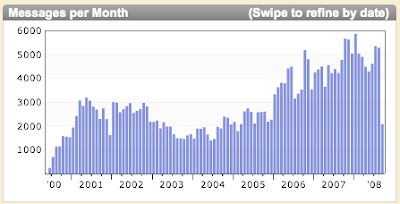 Looks like they've seen a resurgence in activity going up for the last 4 years. They have more list activity than Eclipse, too. (Eclipse directs user questions to web forums that aren't included in our stats.) 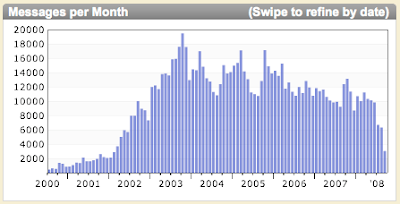 The folks at CollabNet worked with us to transfer the massive archives, and yesterday we issued a joint press release announcing the new list availability. We also boasted passing 27.5 million emails in total. That was yesterday. Today we're passing 28 million. Chugga, chugga!

As Jason announced previously, last Wednesday night I delivered
A Tale of Two Search Engines — a presentation for the Software Architecture and Modeling SIG of SDForum — about building and running the Krugle and MarkMail vertical search engines for code and email, respectively.

Here are my tidied-up slides.

Note carefully that my presentation style is a very visual, story-telling approach for live, interactive audiences -- i.e., the slide deck is quite large and not geared towards a reading-at-home audience. Heck, I only broke down and used bullet points on 4 slides right at the end. :-)

That said, I'll start blogging some of the stories, go deeper on various technical details, and/or get into any of the "fun topics" that people are interested in. Feel free to leave comments here about any that you particularly want to hear about.

Special thanks to Ron Lichty for dragging me into giving this presentation and the wonderful SAMSIG audience for making it so much fun.