As Google celebrates its 10 year anniversary we thought it'd be fun to use our archive of 30 million mailing list messages to see how Google's popularity has grown over time across the list-o-sphere. Boy has it grown! 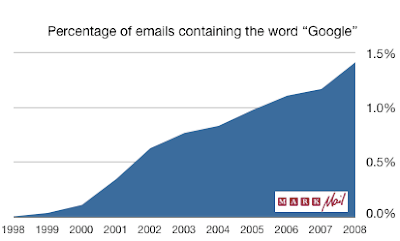 While shockingly high, that 1.4% number is actually calculated with some conservative restrictions. We're excluding all mentions that occur inside quote blocks (where someone replies to another who said the word). It'd be 2% if we didn't have that rule. We're also excluding from our calculations all the Google Groups lists we follow, where Google is often the topic of discussion. With those lists added in? It's 13%.

You can explore this yourself with our public interface. You'll want to query for "google", use the "opt:noquote" flag, and set "-list:googlegroups" to exclude those lists. Then you can add date constraints either by typing "date:2008" in the search or dragging on the chart. Track the numbers as a result of your searches, do a little division, and you get your percentages.